Last year, friends tried to get us to visit Lollibop, but we weren't keen. This year, it was all about critical mass - so many of our friends were going, we thought that we'd miss out if we didn't. It's moved about a bit - from its first home in a park in Hackney, East London (apparently the best, according to regular festival-goers) to Regents Park (where we first visited two years ago), to its newest home, on the Olympic park at Stratford. 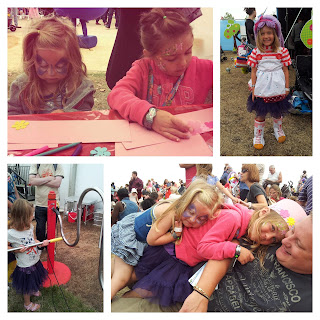 It was certainly popular... tickets for Saturday had fully sold out, and there were thousands of people making their way up from Westfield and queuing to get in.

First genius touch of the day - wristbands.  As soon as you come in, you're given a wristband to write your phone number on and attach to your child. I'm sure this is pretty vital, as there are LOTS of children and LOTS of distractions. Turn your head for a split second, and they've vanished into a sea of legs, never to be seen again... The face painting tent was also near the entrance. If your little one can endure the short 10-minute queue, it's a great way to start the day. Pretty much everything is free (except the stalls where you can buy mostly age-appropriate souvenirs), so take a picnic and you're set for the day. There are loads of things going on... The main stage has a full programme, mostly Dick and Dom, with lots of fun and dancing. There were meet and greets with their favourite cbeebies characters; shows in the Lollipalladium theatre (we saw TicToc and Cloudbabies), story time, Lalaloopsie. There was also a fab-looking cooking stage, although it was always empty at the times we walked past.

The less good stuff... The place is MASSIVE - probably a bit too big for its young audience, and there are lots of areas that sound great, but in reality are just a cheap-looking PR exercise... The Baby Annabel area was prettily set up, but there weren't enough dolls to play with... The kids were happy to stay in the character tents, watching TV and dressing up, but there wasn't actually much to 'do'. There were a few times where we felt that it was all set up to create a captive audience to adverrtise at, rather than the family fun day that its been in the past. There's not a huge amount for older children - our nearly 6-year old loved the science museum tent - but it's mostly aimed at a toddler audience.

The ticket price is reasonable - the first time we went, we paid nearly £100 for 4 tickets and it rained - that torrential rain that thoroughly spoils a british summer day... This time, there were lots of offers, including half price tickets at £11 per person. For virtually the same price as an adult cinema ticket, it was great value for a day out with the kids.